On Never Quitting
I used to think Joe Konrath was full of shit.

Here’s the thing. Since 1980, I’ve worked in the book business. I’ve been a bookseller, a writer, a publisher. Currently I co-own an independent specialty bookstore, Mysterious Galaxy (locations in San Diego and Redondo Beach, CA). The bookstore has never made anybody rich, but we’ve been in business for going on 19 of the most tumultuous years in the history of bookselling, and we’re still going strong.
I’ve worked for two start-up comic book publishers, in different capacities, both of which printed comics and books on paper, and both of them got to be major forces in that industry, and were acquired or partially acquired by much bigger companies with lots of money.
As a writer, I’ve published 45 novels on paper, most from the so-called Big 6 (my main publishers have been Simon & Schuster and Penguin, but HarperCollins and Tor and Warner/Hachette have been in the mix as well). In addition to those, I’ve published more than 100 comic books and graphic novels, a handful of nonfiction books, some short stories. Again, I haven’t gotten rich, but I was working as a full-time writer, having quit the publishing jobs and bought my little dream ranch in the high desert.
And then Konrath—Joe, who had put ungodly amounts of his advance money into promoting his books—got a book rejected and self-published it digitally and said he was actually selling copies. Then he started blogging, bragging about how many copies he was selling, and how he had found a way to make a living as a writer without using the traditional publishers.
See? Full of shit. The industry doesn’t work that way.
Only, he wasn’t. He really was selling books and writing more books and selling those, and making money on this new e-book thing.
I couldn’t see it. I’m a print guy. For decades. I collect books, mostly signed modern first editions. Some of Konrath’s included. Working in publishing, I was responsible for felling dozens, if not hundreds, of trees. Ditto bookselling. Ditto writing. Trees and books went together.
Then last year, the game changed.
I was looking out at 2010 and there were no book contracts on the horizon. The Great Recession had finally clobbered publishing, hard. Editors were getting laid off, lines were being cut. And e-book sales were cutting into print sales, but the big publishers had not yet figured out how to monetize that end of the business. They were treating it like just another format, not understanding that virtually everything about it is different than selling paper books. Those editors who remained were being more cautious than ever about what projects they took on.
With the day job as buffer, I could afford to take some time and write the best book of my career, rather than having to write three or four or five books a year to make ends meet. I did that. I sent it to my agent.k on. My pitches went out, but no offers came back. I was forced—and this is hard to admit, even now—to take a day job again.
It has not yet sold.
I kept working on other projects. I’ve had two novels out this year from Simon & Schuster, one a CSI tie-in novel, one a revised and updated reissue of a teen horror series, now titled Dark Vengeance.
And over there sat Konrath and then Barry Eisler, and my friends J. Carson Black and Scott Nicholson and Lee Goldberg, and some guy with the unlikely monicker of John Locke, and others. The list was growing. These folks were publishing e-books. Self-publishing e-books.
And as an aside, let me just tell you—in the interwoven worlds of publishing and bookselling, the only thing lower than someone who self-publishes is someone who publishes through a “vanity” press, like Vantage or iUniverse. The rule was, if you had to pay money to be published, you weren’t really published. If the only criteria the publisher used before they accepted a manuscript was whether your check cleared, you weren’t really published.
So that Konrath guy—he had to be full of shit.
Because I was doing it the right way, submitting my work to the same big publishers that had published me so many times before, and I was getting nowhere. But he and those others, they were self-publishing and building audiences and selling books.
Okay, I finally thought. I’m a print guy. But I’m a writer, and if that’s what it takes to make it as a writer, then sign me up. 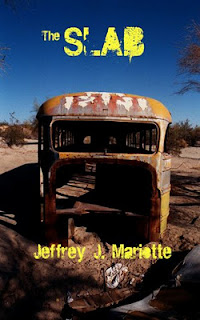 I put out an e-book reprint of my one-and-only small press novel, a horror epic called The Slab. I put out an original thriller that I didn’t even try to sell traditionally, called The Devil’s Bait. I pulled together a collection of short horror fiction called Nine Frights. I did it all myself, even the covers. I self-published.
Now, I’m not here to claim that I’ve had anything like the success that Joe et al have had. I’ve been selling some books, but not boatloads of books.
Nor am I going to claim that I’m giving up on the world of print. I love it too much. My agent is still out with the thriller, and in a few weeks he’ll have another novel to shop.
What I will say is that I want to write, and I want to be paid for my writing. And to that end, I will, as much as possible, try to keep a foot in both camps. Because—you already knew this—Joe was not full of shit, and there is a world over there in e-book-land. There are people there who love to read but who don’t need to hold a paper book in their hands to believe it’s worthwhile. There are people who don’t need to see a publisher’s colophon on the spine—who don’t need a book to have a spine, in fact.
Every bookseller knows writers who have given up. They get a book published, or a few books, and they don’t sell. Offers stop coming, and they stop writing. Who knows what great writing we’ve been deprived of because the business, as it has been established for decades, didn’t see a way to turn a profit on those people?
Some of us are more tenacious than that, or more driven. We write and if we don’t sell we write something else. We don’t quit because we have faith in our abilities, even if the people in New York don’t.
And, it turns out, there’s another way. There are options.
Who knew?
Yeah, okay, Konrath knew. Some others knew. It just took this print dinosaur a while to catch on.
Guess I have to apologize to Joe. Sorry, man. I take it all back. I was wrong.
But you? You were right all along.
Bastard.

Joe sez: This is a ballsy post by Jeff because it goes against basic human nature. One of my truisms is that people would rather defend their beliefs to the death before opening their minds and considering alternatives. Jeff is entrenched in the world of paper, yet is willing to pursue other options. That isn't easy to do, and kudos to him.
He's not asking me for advice, but that never stopped me from giving it, so here it is.
1. Change your self-pub covers. They look homemade, and are probably limiting your sales.
2. Obviously I think searching for a legacy publisher is a waste of time, but even if that is your goal, there is no reason why you can't self-pub those as ebooks while your agent shops them around. There have been many cases of self-pubbed ebooks being picked up by publishers, and you could be making some money on these titles right now. Amazon in particular is buying a lot of self-pubbed titles for their imprints, and they are incredible to work with.
3. Read the post I did with Blake Crouch about how to save indie bookstores. Not a single bookstore has taken us up on our offer, and I know many authors willing to do the same thing Blake and I are suggesting.
4. Start self-pubbing your out-of-print backlist. It's buried treasure, just waiting to be unearthed. The more self-pubbed ebooks you can release, the more virtual shelf-space you occupy, the easier you are to find.
5. Raise the prices on your novels to at least $2.99. Various mounting evidence, along with insider info I can't go into, has convinced me $2.99 ebooks are pretty much always more profitable that 99 cent ebooks. I know that "insider info" comment smacks of bullshit, but I've been talking numbers with certain entities who have proof of this.
I don't believe there is a race to the bottom, and even though ebook prices will go down, pricing a novel between $2.99 and $5.99 seems to, according to my super-secret sources, generate more income than the 99 cent price point.
Now, you shouldn't take my tight-lipped word for it. But you should, as I have always encouraged, experiment with price points. Raising your prices $1 per month (November $1.99, December $2.99, January $3.99) then comparing figures, is a smart idea. It takes some guts, but you've already shown you have guts.
Recently, Blake Crouch and I raised all of our novel prices to $3.99 on Nook. Amazon will probably be next, once we sort through the data. We've also agreed that Stirred, which will be released at $2.99 on November 22, will go up in price after the initial launch.
And to those who whine, "But Joe, you said $2.99 is the perfect price point!" reread my previous comment about keeping an open mind and considering alternatives.
Paper books won't ever go away completely. But they will become a niche market. The legacy paper publishing industry can't survive on a niche market, and they haven't shown authors any value when it comes to the ebook market (and certainly nothing worthy of keeping 52.5% royalties.)
I'll continue to warn authors against pursuing legacy deals until I see substantial change. But so far, no change has come, other than the pathetically laughable announcement that they're finally sharing sales figures with authors.
Are you fucking kidding me? After decades of purposely obtuse, criminally slow royalty statements, they've actually chosen to allow authors to see how many books they're selling? Atta boy! How very progressive!
Pinheads.
Correct me if I'm wrong, but shouldn't this have been available to authors TEN YEARS AGO, when Nielsen Bookscan was launched?
How about just saying, "Sorry we've treated you thousands of authors so unfairly for the last decade in regard to your numbers, but now we're willing to release this data you already should have had."
There are multiple reasons publishers have been obtuse with sales figures. Because keeping authors in the dark suits a number of purposes, not the least of which is maintaining control over them. Because it is easier to hide the money that way. Because they themselves are so poorly run they often may not know how many they've actually sold. Because authors have never been treated fairly in other aspects of the biz, so why treat them fairly in this instance.
The fact that they decided to announce this in a big way is like a celebrity going on national TV and proclaiming, "I know I've said some shit in the past, but I really don't hate minorities anymore! Really!"
Ack. Fail. What a comedy of errors.
But I've gone off on a tangent...
Whichever path you choose to walk, keep an open mind and consider your options. That goes even if you are doing both legacy publishing and self-publishing. There are always more options to consider, more experiments to try. Don't get tied down to ideology, tradition, or loyalty.
You are the author. You are the essential component in the reader/writer relationship. Treat yourself accordingly.
Tweet
JA Konrath at 10:37 AM
Share