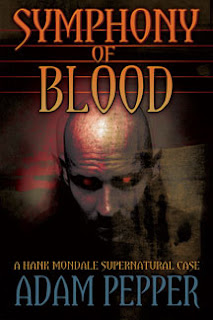 In July, I self published my dark urban fantasy novel, SYMPHONY OF BLOOD: A Hank Mondale Supernatural Case. The process leading up to this decision caused me to rethink my entire worldview on writing.

I’ve been circling the periphery of the publishing business for over a decade. I’ve had two agents, written five novels, accumulated hundreds of rejections but failed to land a mass market deal. I have had some success in the small press and built a loyal, grassroots following but I’ve always aspired to more. I wanted to be in the bookstore, front and center. I came from the school that always measured success by the size of your publisher. I was taught to start at the top and work your way down, no matter what you were trying to publish. Always aim high. Never settle.

The pecking order was easy to see, especially for genre fiction. publishers on top. Then other major publishers. Next, the reputable small presses. Then the niche and micro presses. And way, way, way at the bottom was self publishing. The place for wannabes without the talent to succeed. They were chumps, worse than hacks. At least a hack could write for a check. A self publisher was the bottom feeder.

These beliefs were so deeply ingrained in my thinking they weren’t easy to shed.

I’ve known Joe Konrath since before his first novel was published and I’ve always liked and respected him. I’ve been reading his blog since it began. But when Joe started talking up self publishing, I snickered. Then, my snickers changed to, “well it works for him but it won’t work for me.” What Joe calls Stockholm Syndrome, I know all too well, because I had a nasty case of it! Many of my friends and colleagues still suffer from it. It’s not easy to dismiss an entire mindset. Especially when you’ve built everything around it, your hopes, dreams, career aspirations—your entire identity even. You’ve invested countless man-hours into achieving it. And suddenly, you scratch your forehead and realize, “Wow. Konrath may have a point!”

People tend to focus on the extremes, and they do so at the expense of their own career. We aren’t all going to be Hocking or Locke any more than we’re going to be Patterson or Connolly. Most of us won’t win lotto either.

You don’t plan a career around winning lotto.

Make no mistake about it, playing the slush game, trying to rise above the mountains of manuscripts, getting past the intern, then the junior people, then the senior people, all of whom--no matter how well intentioned--are human beings who are overwhelmed and inundated with submissions, bring their own personal biases and subjective tastes to the table and generally treat slush with equal parts horror, humor and contempt.

I’ve seen many friends land deals and I’ve been nothing but happy for their successes, but I won’t concede they were better writers than me. Their work simply resonated with one person in a position of power who was able to make it happen. The question that I asked myself wasn’t how can I be the next Konrath or Locke, but simply what was best for my career? Put the preconceived notions aside and truly be objective. I’ve watched this industry and see what goes on. There’s no vast conspiracy to see Adam Pepper fail; there’s merely apathy. The only person I can truly count on to build my career is me.

I remember reading an interview with literary agent Scott Hoffman where he compared authors who submit to the slush pile to a desperate girl sitting by the phone waiting to be asked to the prom. At the time it infuriated me. He was calling me a loser. What the hell else was I supposed to do? To me it was just another insider who had no clue what it was like to be on the outside breathing steam on the glass trying desperately to get noticed. In fairness to Hoffman, I was in a bitter state of mind and I don’t have the quote in front of me today. But now, that’s sage advice. Why passively sit around praying for a break when you can take it upon yourself? Why play the slush lottery when you can stack your own deck? For the first time since I’ve been in this game, writers truly don’t need an agent or a publisher to succeed. Authors need an audience. And the audience is out there, reachable and eager to be captured.

Getting caught up in rhetoric. Choosing sides. Prognosticating. None of that means a thing to me. Selling books and reaching readers does.

I’ve always had the talent and the drive, now I have the opportunity. Digital books and the internet truly are the great equalizers. Self publishing wasn’t made for Konrath and Eisler, it was made for me. The guy who played by the rules, followed every guideline, submitted to every market, and never got a shot from . Now, here’s the chance to drive my own carriage instead of waiting for my editor in shining armor.

It took a long time to realize this. But I’m glad I have. SYMPHONY OF BLOOD has been out just two months. It’s been in and out of the top 100 Dark Fantasy ebooks on Amazon and the reviews have been great. The response from book bloggers has been positive. There’s been a nice presence on GoodReads and Library Thing. So far so good.

I have plans for two more indie books by holiday season. One of them is currently on submission with a big six house. I’m going to pull it and publish it myself. Sound insane? It does to me too. After all, I’ve spent the last decade building relationships with industry people in hopes of launching a career. There aren’t many editors in NY who give me the time of day, but this one does. I’m very grateful for the interest he’s shown in me. But I’ve reassessed everything. What gives me the best chance at success? If the editor was truly interested, he would’ve asked me to the prom by now, and I’m done waiting by the phone. It’s my career. After a decade of chasing a dream that was totally out of my control, I can’t tell you how incredible that feels.

Joe sez: Adam was one of the first horror writers I became chummy with, while doing the convention circuit back in 2003. I dug his first book, Memoria, but Symphony of Blood was terrific. When I read it, years ago, I was sure it would get picked up by a major house. It's a cool horror noir novel with a cool hero and a cool monster, and it has a huge twist in the middle that throws readers for a loop.

But it didn't sell. Adam, like many other authors I know, was screwed by the system. Because the system, as it exists, eventually screws everybody.

The only authors still pursuing legacy deals are:

1. Those who have never had them, so their views are all rosy and idealistic. As Adam said, they're waiting for that phone to ring. In the past, there was no choice. Now, it's rather pathetic.

2. Those who have had legacy deals, and have convinced themselves it's the only way to make a living. As I've said before, this is Stockholm Syndrome. The publishing industry does not care about authors. They also are inept when it comes to making books profitable. Why are you still dancing with an abusive partner? Unless they're paying you HUGE money, I can't think of a single reason.

Yes, this is a lottery. Luck plays a huge part.

But you can get lucky on your own terms, by self-pubbing. Or you can get lucky based on the whims and trends of an industry that treats authors poorly, makes lots of bad decisions, and has a terrible profit track record.

In other words, you can put your fate in the hands of the readers, or a group of dinosaurs who are making themselves extinct.

Side note: I just had a one hour conference call with Amazon yesterday about the November 22 release of STIRRED, and it blows me away how smart these folks are. It was unlike any conversation I've ever had with any Big 6 publisher. Amazon truly understands that an essential part of making money is treating authors fairly. They pay much better than the Big 6, listen to and implement authors' ideas, and understand numbers on a near-savant level.

As a result AMAZON HAS MADE MONEY ON EVERY BOOK THEY'VE PUBLISHED.

Reread that sentence above. Now compare that to a Big 6 publisher, who only makes a profit on 1 out of 5 books they publish.

Now, there is no one-way ticket to success. Any way you go, you'll need luck. But legacy publishing involves a lot more luck and doing it on your own, or signing with Amazon, and legacy publishers can actually worsen your luck.

The two books Hachette rejected, TRAPPED and ENDURANCE, have made $160k since 2010.

And don't even get me started about how much money I'm losing on my Jack Daniels books--try a few hundred thousand dollars per year.

Being naive, or having Stockholm Syndrome, shouldn't be among your goals.