How Good is Good Enough?

Bear with me while I work out some doubts.

Last month I published GRANDMA?, a YA comedy horror novel I wrote with my nineteen year old son, Talon.

A lot of the writing was rewriting his prose. He's young, he's still learning, and his stuff wasn't up to the standards I've had since I was first published in 2003.

A few of them, three in particular, I'd never deemed good enough. So they've been sitting in my attic in a plastic bin, having been written before I owned a computer.

While cleaning out the attic, I took a look and decided these three were, in fact, pretty good. Not great, but I'd grade them each a solid B.

They all feature the character of Phineas Troutt, who is the current husband of Jack Daniels, and has appeared in eight JD novels, a handful of short stories, and my TIMECASTER series. Phin was the protag of my very first novel, DEAD ON MY FEET, written when I was 23 years old. Literally half my life ago, as I'll turn 47 next month.

I reread it, and decided I could do a quick polish and self-pub it and its two sequels without spending a lot of time and energy on them.

But, as I'm polishing, I find I'm doing a lot of rewriting.

Which brings us to the title of this blog post: How Good is Good Enough?

DEAD ON MY FEET is going to sell a certain number to my diehard fans, who buy everything I put out.

It will also sell a number of copies to my casual fans, who buy some of my stuff (for example the thrillers, but not the horror, or the erotica, but not the sci fi).

It will also sell a number of copies to those who have never heard of me, and it will serve as an introduction to my work. Some of those readers may become fans, and some of those fans may become diehards who read/buy everything.

Every book is a billboard for your entire backlist. If that book is enjoyed, it will lead a certain number of readers to your other books.

Does everyone see where I'm going with this? 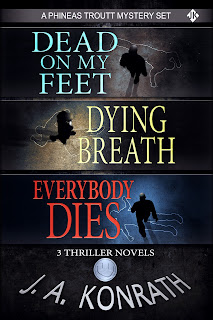 When I look at my wife's reading habits, I'm even more perplexed. My wife reads 3 to 5 novels a week. When she finds a new author, she'll read every book by that author.

Even the disappointing books.

In fact, Maria will stick with an author for three mediocre novels before she finally gives up on them.

Talk about rewarding mediocrity. But she isn't the only one who does this. There is a lot of stuff that I find so-so that is insanely popular.

I like to consider my novels above average (I'm sure all writers feel the same about their work, so there is a disconnect somewhere). But let's say my books are, indeed, average.

Why should I try to do better?

If a Grade B book will only result in slightly fewer readers over the next ten years, why should I put in weeks and weeks of effort to make it a Grade A book? Why not just put it out there, and spend those weeks writing a new book that I'm sure will please more people?

I consider DISTURB to be my weakest novel. Not only is it short, but it lacks the humor found in my other books. It's a straight medical thriller, and I wrote it by numbers rather than put my personality into it. But it still sells reasonably well, and has an Amazon average rating of four stars.

Many times, in the past, I've thought about doing a rewrite of DISTURB to beef it up, make it better. But why should I? Would it sell enough extra copies to be worth the effort?

I've been planning on spending the rest of the month to whip DEAD ON MY FEET in Grade A shape. But I could release it tomorrow as a Grade B novel, not lose very many readers in the long run, and use those two weeks to work on my next Grade A novel.

On the surface, this seems like a no-brainer. Release those three old books with minimal work, and use that time I've saved to write new stuff. I'll make more money in the long run, and the only downside is that some readers won't be as pumped about the Phin books as my other books. I'll do okay with DEAD ON MY FEET, but fans are waiting for the next Jack Daniels book, and getting that out two or three weeks earlier would mean two or three weeks of quicker income.

Ebooks will theoretically earn money forever. But I won't live forever. I have an expiration date. Why not get paid a few weeks sooner, as well as save three weeks of work (and by extension, three weeks of my life.)

I suppose the same reason that got me into writing--the desire to tell a fun story--prevents me from releasing a book that isn't as good as it could be.

On the other hand, my favorite books of mine are the TIMECASTER series. I love writing those. But they're the weakest sellers in my backlist, so the long-awaited third book in that trilogy keeps getting pushed back. If I was writing mainly to please myself, shouldn't I be working on that now?

So what's the answer? Please readers? Please myself? Please the tax man?

Hemingway said that stories are never finished, they're simply due. But somewhere between endless rewriting and going live there is a sweet spot where the story is good enough to go out into the world and stand on its own.

I don't want to release something I don't think is ready. I feel I have one chance to hook readers, so I should show them my best.

But, at the same time, I'm probably wrong about that. My success is based on luck. Not on how good I think my own books are.

There is so much mediocrity in the world, and mediocre things can, and are, popular. Why try harder?

Every author secretly thinks their books are uniquely special, but the vast majority of books don't sell. I haven't been blogging regularly for eight months, and I still get urgent emails from authors, wondering why their sales are slumping. They ask if it's their covers, or if the market is crashing, or if they aren't doing the right kind of marketing.

But none of them ever ask if they self-pubbed too soon, before the book was Grade A. Writers are a pretty insecure bunch, but I've never met one who blames their sales on their bad writing.

I gotta say, it's seductive to think I could self-pub these three books instantly, make some money, not worry about the anticipated three star average (I encourage writers to not look at their reviews, and I usually don't), and immediately move on to something I know will sell better.

But I won't do that. I'll put in the time and make these books better. Money is nice. Having more time is nice. However, the nicest thing of all is having pride in my work.

I'm pretty sure I'm just as deluded as everyone is. I don't deserve to sell as well as I do. So I've decided to always give it my best shot, because if my sales ever slow I don't want mediocrity to be a possible culprit.

However, I'm willing to admit that might be a stupid attitude, for many reasons.