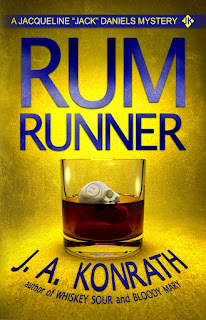 Incredibly, I haven't released a solo book since 2010, when SHAKEN came out. Got to say, it feels good. And I'm not done with Jack yet. Which brings me to this blog post.

On this blog, I've written hundreds of thousands of words touting the advantages of self-publishing over traditional publishing. Keeping your rights, higher ebook royalties, and having control over pricing, presentation, and content are the three biggest reasons.

Crossovers. I really enjoy it when intellectual properties visit each other's universes. Back when Who Framed Roger Rabbit? came out, I was giddy with joy during the Donald Duck/Daffy Duck piano duel. One of the first comic books I ever bought was Superman Vs. the Amazing Spider-Man. Sonic and Mario in the same game? Sign me up. Mulder and Scully from The X-Files on The Simpsons? Fangasm!

So naturally I've been a huge proponent of crossovers in my own fictional worlds. My thriller HAUNTED HOUSE combined characters from ORIGIN, THE LIST, AFRAID, TRAPPED, and ENDURANCE. When I developed my Kindle World, I had the opportunity to work with F. Paul Wilson again, and his character Repairman Jack got to brawl with, and sleep with, Chandler from the eponymous series I created with Ann Voss Peterson in our short novel FIX. Blake Crouch's villain Luther Kite figures prominently in STIRRED, and in my upcoming novel LAST CALL. 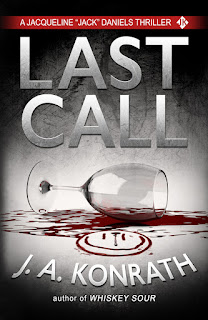 And yes, that's a link. After years of pushing back the release date, you can finally pre-order LAST CALL.

My characters often show up in Ann Voss Peterson's Val Ryker series, and I've done crossover novels with Iain Rob Wright and Jude Hardin, and have co-written too many short stories to count.

Legacy publisher aren't big on crossovers. Rights are tricky. While some crossovers do exist, publishers looking to build an author's brand seem to want to focus on that author and that brand, rather than split time and profits with another author or publisher. The non-compete and first option clauses that are still boilerplate in legacy contracts also make a crossovers difficult or impossible.

If you want to share universes, going indie is the easier way to do it.

Especially if you want to attempt what I just did, and write three stories that crossover with each other and take place during the same 48 hour time period. More on that in a moment.

Novellas. In a paper world, books have to be a certain length. In a digital world, they don't. So a twenty-thousand word story that is too long for magazines and too short for a print book has no barrier to entry. 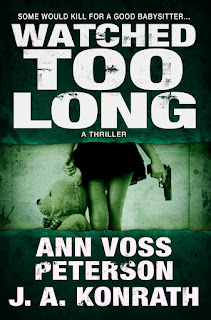 WATCHED TOO LONG by Ann Voss Peterson and yours truly, is only 20k words. And it takes place in Ann's Val Ryker universe, but follows a side story that occurs in RUM RUNNER.

So you can (and should) read RUM RUNNER, then read WATCHED TOO LONG to see what happened to Jack's daughter, Samantha, when Jack asked Val Ryker to babysit.

Release Dates. WATCHED TOO LONG comes out today. And in two weeks, WEBCAM by my horror pen name, Jack Kilborn, will be released. You can pre-order it. Releasing three novels (LAST CALL comes out May 25) and a novella within two months is something much easier to do as an indie than if you were with a publisher. Publishers usually won't release more than one title a year. And release two titles on the same day? Unheard of. 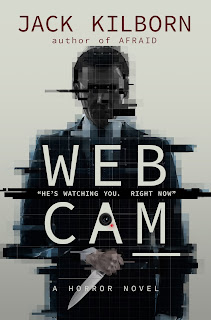 WEBCAM also crosses over with RUM RUNNER and WATCHED TOO LONG. The hero, a cop named Tom Mankowski (HAUNTED HOUSE, THE LIST) winds up in Jack's novel, and she winds up in his.

While each of these stories can be read and enjoyed as a standalone, part of the fun of writing them was hoping readers would explore all three, to see where and how they crossover. But there aren't any spoilers of cliffhangers, so if you only want to read one or two, it isn't necessary to read all three.

I had a ball doing this, and I hope it shows in the writing. Being able to release four connected stories, one a collaboration, in such a short period of time, is something that I couldn't ever do when I had legacy contracts. Plus I keep my rights, make better royalties, and have final say over cover art, price, and design.

I'll be releasing paper versions of these shortly. And for the first time, I'll be self-pubbing the audio versions. The guy reading is one of my favorite singer/songwriters, going back to 1986 when I bought his first album. On cassette,which dates both of us. To be able to work with him is surreal, in the best way possible. I've spent endless hours singing his songs, and now he's reading my books. Fangasm.

Now some Q & A with myself.

A: That is correct. I urge every single person reading this to buy these books, and gift copies to everyone they know. Is that too much to ask?

Q: Is Blake Crouch writing LAST CALL with you?

A: He is not. Blake has two TV series currently in production, and will be spending the summer touring with his excellent new thriller, DARK MATTER. If you see him on one of his many stops, give him a sloppy kiss from me.

Q: So does LAST CALL have Luther Kite in it?

A: It does. Blake has given me permission to use his characters Luther and Lucy (from SERIAL KILLERS UNCUT).

Q: Why are you releasing so many titles in such a short time frame?

A: Because I can. And because I'm curious how it will work out. For decades, publishers have insisted on the "one book per year" route for most authors. The justification for this varies. Some say that too many new titles too quickly forces them to compete with each other and results in lost sales. Some say the windowing of hardbacks to paperbacks requires a full year, in order to suck the high cost of hardcovers out of as many fans as possible. Then the cheaper paperback (supposedly) pimps the newest hardcover release. Some say it is because publishing takes so damn long (often 18 months after the contract is signed before the book hits the stores) and publisher's schedules are so booked they can't possibly squeeze any more releases in.

I think this is all bullshit. When I like an author, I want to read as much as I can by that author. I believe many readers share my sentiment. So releasing four titles in 60 days will be an interesting experiment that has the potential to show if I'm correct or not.

Q: Who is the mystery rock star reading your book?

A: We haven't made the announcement yet. But he's been a professional musician since the 1970s, and has released over a dozen albums. Also, the plan is for me to do the voice of Harry McGlade on these four titles.

Q: Do these books be have to be read in any special order?

A: No. Even though they interconnect, they're all standalones. The real challenge was to make sure that reading one didn't spoil the others, and to make sure the characters had good reasons for being in each other's stories.

That said, if you insist on doing things chronologically, here's the order I suggest: RUM RUNNER, WATCHED TOO LONG, WEBCAM, LAST CALL.

Q: Will you be doing more Jack Daniels novels?

A: Yes. I'm also going to do sequels to THE LIST and ORIGIN, and finish the TIMECASTER trilogy.

A: Yes. Next week, all of my novels are going to be changed to five or six bucks. I have a few reasons for this, which I'm happy to discuss.

When I first started doing this self-pub thing, I had no idea it would wind up being my main source of income. Back then, I priced ebooks at 99 cents because free wasn't an option. It was only when I started making serious money that I considered self-publishing as a career, rather than as a form of self-promotion.

But Kindle Unlimited is changing the game. As more and more readers move to the subscription model, ebook sales are dropping. This is purely anecdotal, so I don't know if it's a widespread thing. I also don't know if the drop in sales directly corresponds with a rise in KENP royalties. My KDP income is down about 25% from last year, but that could be attributed to me not releasing a solo book in so long. Will raising ebook prices help counter that drop? Only way to know is to try.

Amazon has a Beta service called KDP Pricing Support, which recommends the sweet spot for ebook prices to maximize income. I don't know if this recommendation takes KENP into account, but it suggests $5.49 for genre ebook novels.

Also, I'm watching how Amazon is pricing their imprint titles, and seeing $5.99 - $7.99. Amazon is all about data and algorithms. Unlike the Big 5, which prices ebooks high to protect their paper oligopoly, Amazon's incentive is divided. They no doubt want to make a profit, but they also are fine with postponing profits to grow their customer base. But if Amazon truly wanted to incentivize Kindle ereader sales they'd make every A-Pub book 99 cents. Or free. Or even $3.99, as I'm currently doing.

But they seem pretty consistent with six to eight dollars for their newer releases. I can't help but feel that they know something I don't. So I'll give it a shot.

If you haven't picked up my series yet, now is the time. The first eight books are either free or under two bucks each for a limited time. Grab them before I jack up the prices.

And thanks for reading. I'd love to hear in the comments from authors who experiment with pricing, and/or with crossovers.
JA Konrath at 6:56 AM
Share