I've written in many genres, including mystery, thriller, horror, science fiction, humor, YA, chick lit (is it still called chick lit?), and erotica.

But I've never written a romance. 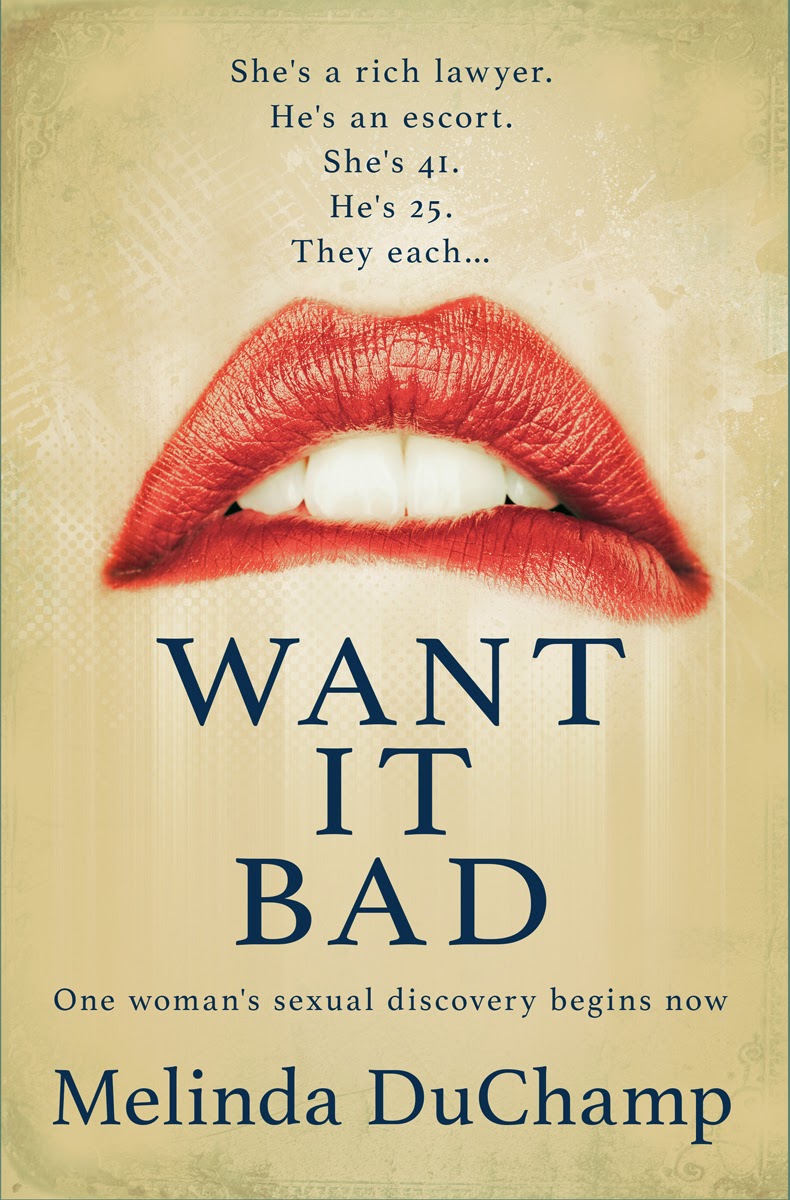 Co-written with my frequent collaborator, Ann Voss Peterson, WANT IT BAD is a departure from the smut we've penned in the past.

Not to say there isn't sex in this book. There's loads of sex. Heaps of sex. Kinky sex.

But this is the first time I've ever attempted to actually make sex essential to the arcs of the two main characters. Where 'girl meets boy' is the point of the plot.

Ann is an expert when it comes to writing romance, having done twenty-five romantic suspense books for Harlequin.

However, while I've had relationships as components of my plot before, I've never had them been the linchpin the story hangs upon. With WANT IT BAD the point of the book is the relationship, and if it will work out or not.

Carla thought she had it all together.

Then Jake moved in next door.

She never expected to fall for someone half her age. Especially Jake, an escort who specialized in very kinky sex.

But Carla was curious. And rich. And when Jake accepts her as a client, they each may have gotten more than they'd bargained for...

WANT IT BAD
It begins where 50 Shades of Grey left off...

Want It Bad is a 64,000 word contemporary romance by bestselling author Melinda DuChamp. It's hot. It's playful. It's more fun than the last ten books you've read.

Try Want It Bad. You won't be disappointed.

So listen to the nice book description and try Want It Bad, for just $3.99 on Kindle.

So why am I writing kinky romance?

First, because I can.

We live during the greatest time in history to be a fiction writer. Anything you can dream up, you can publish. Maybe it will find an audience. Maybe it won't.

But at least it has the chance to.

It always amuses me when the status quo preaches about how the gatekeepers of New York, in their valiant efforts to curtail the so-called Tsunami of Crap, boast how they're responsible for safeguarding literature and culture and are solely responsible for bringing books to the masses.

The opposite is the truth. The Big 5 are censors. For decades, their paper book distribution oligopoly limited what was available to readers. Their "curation", which they've touted as a feature, has actually been a gigantic bug. A censorship bug, which prevented readers from deciding for themselves what's worthy and what isn't.

It's so liberating, so intoxicating, to be able to write the kind of book I want to, without being subjected to the whims of the gatekeepers. Imagine if the Internet only allowed certain websites to be published based on what a select handful of people deemed appropriate. We'd have a far smaller, much less interesting World Wide Web.

Yet, even with the number of websites surpassing 1 billion, we can all still find worthy URLs that interest us.

Self-publishing doesn't lead to a Tsunami of Crap. It leads to freedom, more choices, better prices, and the opportunity for more writers and readers to indulge in their whims and passions.

Our male protagonist is a sex worker. An escort. A prostitute. I'm pretty sure Harlequin didn't allow that back when Ann was publishing her romance continuities. I also believe Harlequin had a guideline that once the hero met the heroine, neither were allowed to philander. Strike two. Finally, the sex in Want It Bad makes Fifty Shades of Grey look like a Disney picturebook. Harlequin may have had some racy titles, but I doubt they ever got this racy.

Which brings me to the second reason I wrote this book:

I enjoy the challenge.

Writing in a new genre is like dating someone new. It's exciting. It's fun. It's uncomfortable. It forces you to try new things, tests your limits, teaches you how to overcome obstacles, and is an opportunity for growth.

When there are no guidelines, no boundaries, no deadlines, the only limit is your own imagination.

Having the chance to write outside of your comfort zone is reason enough to try it.

What's the third reason I tried a new genre?

Want it Bad is my 34th novel. My largest success has been in mystery/thriller, followed by horror. Both genres continue to do well.

I made a buttload of money during the erotica boom that E.L. James created.

I made a pittance with sc-fi, even though that was crazy fun to write and I still get emails from those waiting for me to finish the Timecaster trilogy. (Which I will, someday).

Romance is the largest genre. It's the one with the most voracious readers.

I'd like those readers to discover me. There are hundreds of millions of people who aren't interested in Jack Daniels, or horror, or fairy tale erotica. But I believe my writing can entertain these people, if given the opportunity.

So here is my first try at what might be many tries, to find an audience that my previous work doesn't tempt.

Maybe it'll work. Maybe it won't. But I'm lucky that I have some breathing room to be able to experiment.

So check out Want It Bad. It has romance. It has female-buddy banter. It has humor. It has insanely kinky sex. It's a feminist, empowering, 21st century love story that couldn't have been written ten years ago because the genre, opportunity, and mindset didn't exist.

Also, I rarely ask to be tweeted, or linked to on Facebook or Google+, but as an experiment I'd like everyone reading this to do one or all of those. I'll be watching the results.
JA Konrath at 6:58 PM
Share