One hundred grand. That's how much I've made on Amazon in the last three weeks.

This is from my self-pubbed books. The ones the Big 6 rejected.

I am soooo glad I had so many books rejected.

Here's a screen shot of a portion of what I've sold since January 1. 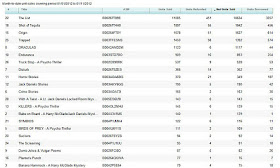 This is missing 15 of my titles (some were cut off, some are on my co-writers' KDP accounts). It also doesn't show over 1500 sales I've had in Kindle foreign markets.

I'm having a very hard time wrapping my head around these numbers.

I'm also having a hard time trying to figure out what this means for the future. But I'll give it a shot.

Let's pretend that The List wasn't in the Top 100 right now and has only sold 1800 copies this month, comparable to Shot of Tequila. I'd still be selling 800 ebooks a day, making over $1600.

That means I'd make about $50,000 in January, just in US sales. Which means my income has increased by about 30% overall. I'm not sure this will last throughout the year, but it seems reasonable.

This is no longer a question of choosing between accepting 17.5% royalties from a legacy publisher or doing it yourself. This has now become the best way in the history of mankind for a writer to earn money. It may be one of the greatest ways to ever make money, period.

We can directly and instantly reach hundreds of millions of consumers in a global marketplace. We can set the list price, and we get to keep the majority of that list price. Readers can buy our work instantly on devices that they love. They don't have to go to the store, the store is in their hands. Once a book is written and formatted it can sell unlimited copies, forever, without any costs to the writer other than the initial time investment and monetary investment (formatting, editing, cover.)

Now imagine them willingly giving you that dollar.

We're not there yet. But I've been following the ebook revolution for three years, and I never could have predicted this would get so big so fast. I've consistently been surprised by numbers and sales, and have lost count of the times I've said, "This is unreal."

But it isn't unreal. It's very real. I know, because I just pinched myself to make sure I wasn't dreaming. For the fifth time today.