Just went through some of my old rejection letters. As readers of this blog know, I garnered more than 500 rejections before getting published. 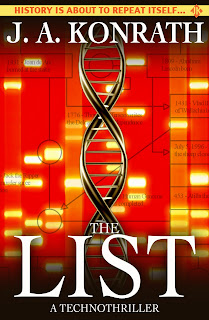 A billionaire Senator with money to burn...
A thirty year old science experiment, about to be revealed...
Seven people, marked for death, not for what they know, but for what they are...

THE LIST by JA Konrath
History is about to repeat itself

THE LIST is a bit of a departure for Konrath. It's a technothriller about a group of ten people who each have tattoos of numbers on the bottoms their feet, and don't know why.

One of them, a Chicago Homicide cop named Tom Mankowski, has had one of these strange tattoos since birth. When he investigates a violent murder and discovers the victim also has a tattooed number, it sets the ball rolling for an adventure of historic proportions.

To say more would give away too much.

The above description was, more or less, the query letter that my agent sent out to over a dozen top editors.


Here are some of the rejections The List received:

Here is The List. I'm returning it to you. Sorry it didn't work out at Ballantine, hope you'll place it elsewhere soon. - Ballantine Books

As discussed, The List by Joe Konrath isn't a book for me. Thank you, and I'm sorry. - Penguin Putnam

Thanks for letting me see The List by Joe Konrath. While it's certainly not a plot I've seen before--at least the cloning part--it seems very familiar all the same, plus the humor in the storytelling seems a little forced and sitcom-ish, and finally exhausted my interest. So it has to be a pass for me. Despite my reservations about The List, I suspect the originality of the concept will prove a lure to someone, and I wish you all the best with it. - Simon & Schuster


I have just taken on a thriller with comparable qualities, and we have such a small list that I can only afford to publish one novel of this kind every year. So, a pass, but many thanks for sending it my way. - Talk Miramax Books


Thanks for sending me The List by Joe Konrath. There's much to like here--particularly the author's savvy prose and the way he ieasily integrates his knowledge of police procedures into the story. As for the plot, I was initially intrigued by the way the protagonist was linked to the murders, but ultimately I had issues with it. I had a hard time believing inthe way he learned about his bizaree adoption taking it so well and regarding it simply as another clue surrounding the murders. I suppose the story twists from that point on were harder to swallow. But this is just my opinion, of course... I'm sure other editors will disagree. - Doubleday


Thanks for letting me read Joe Kramath's (sic) The List. I', sorry to say that despite the good writing and humor, I think the story may be too fabulous for us to publish it successfully. Thanks again and best of luck to you and the author. - Little, Brown and Company

As you know, Will passed along to me The List by Jo (sic) Konrath, which I read with great interest. It's certainly an original premise, and Konrath has an engaging style. I'm afraid though that ultimately we weren't sufficiently drawn into the thriller aspects of the novel, and thus have decided to pass. Thanks very much for thinking of us for this. I'll be interested to hear where this lands. - Hyperion (who later went on to publish six of my later novels)

Thanks so much for the look at The List by Joe Konrath. Needless to say, I found the premise extremely imaginative and original, and the author does a remarkable job balancing the brisk pacing with humor. In the end, however, I just thought it would be hard for us to really break this out in a competitive fiction market, as its novelty seems to hamper its commercial potential. - New American Library


I must say the cop-protagonist of this novel is one of the brightest lights in the clone world, an exact replica of Thomas Jefferson. But as I kept reading, the improbabilities kept bumping into each other and I just couldn't believe the storyline. Thank you for letting me see this, and I wish I could be more enthusiastic. HarperCollins Publishers


Thank you for sending me The List by Joe Konrath. I liked the set-up for this novel a great deal--a detective investigation a murder finds that the victim shares the same enigmatic tattoo that he possesses. Unfortunately, I just didn't think the rest of the novel could sustain that sense of eerie anticipation. The reason for the tattoos, that all participants were part of a secret government cloning experiment, just seemed a little too familiar, and the constant joking, while witty at times, also eroded the tension and sense of menace. I appreciate the look and hope another editor feels differently. Bantam Dell Publishing Group


I shared The List by Joe Konrath with some colleagues here. Several found it amusing but ultimately we felt it was a bit too odd and were concerned about the audience. So I will be declining. William Morrow


I certainly give Joe Konrath lots of credit for trying to put forth a most creative and different kind of thriller involving clones of famous people. And for the most part his wise-cracking dialogue held my attention, too. But int he final analysis, I just thought he tried to hard in this over-the-top novel. I just think it would be a very difficult thriller to sell to our sales force in a major way. The credibility factor is strained a wee bit too much. As such, I'm returning it with my regrets, but with my thanks for the look. - Warner Books


Thank you for sending The List by Joe Konrath. It has a lot going for it--especially certain moments of humor--but in the end it seemed too much like the novelization of a movie than a genuine novel. The characters are types, and the echoes of such movies as Lethal Weapon became distracting. if this really were a movie tie-in, I could see pursuing it, but as it is, I'm going to pass. I'm sure you'll find the right home for it, though. - Pocket Books


Thanks for following up so promptly and sending The List by Joe Konrath. I believe the idea is strong and the writer has great style.Unfortunately, I can not take this manuscript on in the state that it is in. To begin with, it is simply too long. The writer needs to trim his work down a good deal. The story is also too riddled with conversation, which slows down the pace and is cumbersome to read. It lacks the spark and sustained suspense required to stand out on the crowded fiction shelf. - St. Martin's Press

Right now it is in the Kindle Top 100 again (it has cracked the Top 100 four different times since I published it.)

What does that translate into sales?

Hopefully, it will catch up to my novel Trapped, which is also in the Top 100 (for the third time) and is currently ranked at #73. Trapped was part of a two book deal with Grand Central, but they rejected it. I published it myself in June of 2010. Since then, it has earned me more than $100,000.

So I'd like to take this opportunity to send warm holiday cheer and sincere thanks the editors at HarperCollins, Bantam Dell, Hyperion, NAL, Simon & Schuster, Doubleday, William Morrow, Warner Books, St. Martin's Press, Ballantine, Penguin Putnam, Talk Miramax, Pocket Books, Little, Brown and Company, for rejecting The List. And thanks to Grand Central for rejecting Trapped.

And just to show my story isn't unique, my friend and writing partner, Blake Crouch, recently had a similar experience with his novel Run. It was shopped during the fall of 2010 to a dozen major publishers, all of whom rejected it. Since Blake published Run himself in March, it has sold over 40,000 copies, and is currently ranked at #92 in the Kindle store. In the last 48 hours alone, it has sold over 2000 copies.

Blake and I want to wish all of those editors who rejected us a very Happy New Year.