Not the crazy $12.99 more-than-the-paperback prices that legacy publishing is so fond of so they can continue to pay Manhattan rents—but higher than $0.99, certainly. Even for a short story.

That’s right, once upon a time, my short stories were selling for $2.99. And yes, they were selling.

But things changed. The indie market got more crowded. Authors started selling their full-length novels for $0.99 and some even gave them away for free. Blogs popped up everywhere telling Kindle owners where to find free and cheap ebooks.

So I decided to experiment with my prices. I lowered the prices on all my stories to $0.99—that was everything from 3K-15K. Everything else (some of which was priced as high as $5.99) I lowered to $3.99. And I left them that way for three months. A full quarter of ebook sales.

What did I discover?

At first, I found that lowering my price to $0.99 shot me up on a few bestseller lists. That increased my e

xposure, which was great. And I also found that my sales of those $0.99 titles doubled. Stories that had previously been selling 50 a month were now selling 100.

At first, I thought it might be, given the exposure. The higher you are in the rankings, the more people see your name, the more sales you make, right? But over time, more and more (and more!) indie authors started selling their stuff at $0.99 too, and those lists became overrun with cheap books.

I’d pretty much decided to quit the experiment when I read a comment from Konrath on his blog confirming my suspicion—that authors don’t make money at anything less than $2.99. Which meant, and I’ll quote Joe here:

“My data also shows that novels outsell short stories, even though I've priced my shorts at 99 cents. It stands to reason that if I switch shorts to $2.99, I'll sell fewer, but I bet I make more money. So the next step is to raise novels to $3.99-$4.99 and short stories to $2.99 and see what happens. Assuming I have the guts to do so...”

I’ve now changed all my short story prices back to $2.99, and raised my novel prices to $4.99. I imagine I’ll run this experiment for another three months and see what happens. If logic prevails, I’ll sell fewer books, but make more money.

But as Joe pointed out, doing this takes guts. Moving beyond the magical $2.99 price-point for novels, pushing those higher, to make room for short stories at that price, is a risky proposition. Will the market bear it?

Honestly, I think it will. And here’s why—Kindle readers are tired of $0.99 cheapies. The shine is off the new toy, people have stopped loading their Kindles up with freebies and cheapies, and have started getting more discerning about what they download. Many Kindle readers are starting to shy away from the $0.99 price point because they’ve read some stinkers and don’t want to travel down that road again. What was once a huge draw for Kindle readers—oooh, look, cheap books for my new toy!—has now become the opposite.

Of course, I could be wrong.

Which is why it’s a scary experiment!

Apropos for Halloween, don’t you think?

So let’s kick off this frightening new price point with a $2.99 story very fitting for the season, shall we? 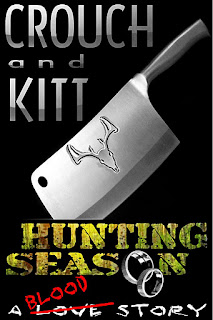 For those of you scratching your heads, wondering how in the heck the pair of us ending up writing together, given that our genres are so vastly different, I’ll explain. Back at the beginning of the year, I’d posted some of my sales numbers on Joe’s blog, which at the time were astronomical (I was making $30,000 a month at Barnes and Noble alone!) and Joe jokingly said, “If you ever want to collaborate, let me know!”

I’d just finished reading and reviewing DRACULAS – and being the huge horror fan that I am, how could I resist? I emailed him to say, “I know you were kidding, but I’d love to collaborate with you guys.” And to my surprise, Joe Konrath and Blake Crouch actually took me up on the offer! They were planning a sequel to DRACULAS called WOLFMEN, and wanted me on board, along with a fourth writer (who has yet to be disclosed).

It made perfect marketing sense to cross-pollinate their audience and mine, which were both large, but vastly different.

Of course, no one knew if this great idea would work in practice…

So Blake Crouch agreed to take me out for a test run, and that’s how this story was born. The collaboration process was, I must say, an amazing success, and I couldn’t be prouder of the result. I really think this story is something special—but I’m probably a little biased!

If you want to know more about how HUNTING SEASON: A Love Blood Story was written, what the process was and how things developed, there’s an interview between myself and Blake included as bonus material at the end.

It’s available on Amazon and Barnes and Noble for… you guessed it.

Is it worth it?

You be the judge!

She’s the trophy wife of a trophy hunter.

They used to be high school sweethearts, but that was two decades ago, and times have changed.

Meet Ariana Plano...40 years old, miserable, stuck in a loveless marriage to the worst mistake of her life.

Meet Ray Koski...40 years old, miserable, a lonely butcher who can do nothing but immerse himself in the drudgery of his work.

Once a week during hunting season, she brings her old teenage flame game meat for processing. They do not speak. They rarely make eye contact. Some histories are just too painful.

But this week will be different.

This week—a shocking encounter twenty-two years in the making—will change everything.

Joe sez: In November, I'm going to raise some of my prices on shorts, just to see how it goes. In December, I'll do the same with novels.

No gain without risk. I'm on a lot of bestseller lists, and raising prices may make those ebooks fall off, resulting in fewer sales. But will they be so many fewer I earn less money? Only way to find out is to try it.

As for HUNTING SEASON, it was a really fun, very twisted horror story, perfect for Halloween.