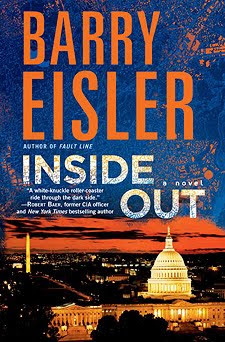 For those who don't know, Barry Eisler is the second hardest working man in publishing; though his latest marketing effort for Inside Out is bigger than anything I've ever done before. I get exhausted just thinking about it.

Besides doing his usual 100+ bookstore tour (he has already signed at over 200 stores this year alone), Barry put together a thirty page marketing and publicity campaign that puts all but the most competent publicists to shame.

Inside Out, which goes on sale June 29, is ripped straight from today's headlines; CIA videotapes showing enhanced interrogation techniques get misplaced. Being former CIA himself, Eisler has an unique insight, and a solid opinion, on what our government has been doing post 9/11, and this book is an eye-opener.

But laid on top of the political subtext is a kick-ass thriller, filled with exotic locations, double-crosses, intense action, and over-the-top sex.

I was lucky enough to read Inside Out before it was published, and it’s a must-buy for anyone who likes mysteries. It's easily the best thriller of the year. It's also Barry's best book, which is saying something considering his oeuvre.

I caught up with Barry in NY at BEA, and hit him with a few questions.

Joe: I’ve noticed loyalty is a continuing theme for you, especially in a “sense of duty vs. desire for self-interest” way.

But rather than ask you about that, I was hoping you could post an excerpt from the big sex scene.

Barry: As long as people understand I’m only doing this under duress:

Somehow his hand had slipped under her robe. She pressed it tightly against her breasts. Her skin was warm and smooth. He could feel her heart pounding.

He stopped, not sure what he was saying, feeling like he was babbling. His hand moved. He felt a hard nipple against his palm. He wanted her so much it made him groan.

She sat up and turned to him. The robe had opened partly, and in his peripheral vision he could see the muscles of her neck, her breasts contoured in shadow, the skin smooth and dark against the white terry cloth. He was massively hard and knew he’d never done anything as difficult as not reaching out and tearing the robe off her and throwing her back on the bed and—

He shook his head, not comprehending. “What?”

She slapped him. Hard. His head rocked back and he saw a white flash behind his eyes. He was so stunned by it that she managed to slap him again before he could do anything to stop her, another powerful, stinging shot from the opposite side. A red haze misted his vision and he felt his scalp tighten with anger. She drew back her arm again, her hand balled into a fist this time, and as the punch came forward, he snaked an arm inside and deflected it. He pushed her onto her back and straddled her. She twisted an arm free and punched him in the mouth. She couldn’t get any leverage behind the blow but it smashed his lips into his teeth and hurt like hell.

“Bitch,” he said, turning his head and spitting blood. She tried to hit him again and he caught her wrists and pinned them to the bed next to her head…

And if you want to hear a bit more, here’s a video Random House Audio shot of me reading the scene while we recorded the audiobook in LA.

Joe: You aren’t allowed to talk about your time with the CIA, and I respect that. But I am curious if the Agency has to vet your manuscripts, and if so, have they ever made you cut anything?

Barry: When I was with the Agency, they taught me it’s better to seek forgiveness than to ask permission. I’ve tried to honor their teachings since I left.

Joe: I’m putting you in charge of the entire publishing industry. What will you do to improve it?

Barry: Dude… how much space do you have here for my answer?

Okay, in short, they need to do two things. First, they need to become competent at traditional aspects of the business, including: selecting the right title, based on automatic and acquired resonance; writing a good author bio; choosing an effective book cover; properly packaging the book. To do all this, publishers have to stop winging it and instead learn the principles behind branding, marketing, and selling. They also need to change their business culture into one where an understanding of these principles is passed on to the next generation of employees, who themselves need to be inculcated with the values of a business culture that rewards the dissemination of institutional learning.

Second, they need to understand the way digital is changing the business they’re in. Understanding piracy is not necessarily a zero-sum game, for example, as you’ve written about many times before. And understanding, again as you’ve repeatedly pointed out and demonstrated with actual data, that the way you fight piracy is through cost and convenience, not with lawsuits and DRM.

Joe: You earned a black belt in judo at the Kodokan in Japan. Do you still practice?

Barry: Sadly, no. I got pretty into Brazilian Jiu-jitsu for a while, but after two knee surgeries, I decided someone was trying to tell me something. These days I practice this and that mostly on my own, and when I can, train with some amazing people: Massad Ayoob, Tony Blauer, Wim Demeere, Marc MacYoung, Peyton Quinn, to name a few.

(Joe's side note: I've visited Barry's house, and he has converted his garage into a dojo. After a few belts of scotch, he insisted on showing me how it was possible to knock someone out in five seconds. And true to his word, he can do it. I'm never drinking with Barry again.)

Joe: I’ve seen you do lectures on personal security. Give me five of your best self-defense tips.

Barry: 1. Think like the opposition—if you were trying to do whatever it is that concerns you (kidnapping, mugging, ATM robbery), how would you do it? Where? When? What kind of victim would you be looking for? Thinking like the opposition will help you spot problems before it’s too late.

2. Use good situational awareness. When you’re home and the doors are locked, you can afford not to pay attention. When you’re in a zone you’ve identified as dangerous because you’re thinking like the opposition, you need to be more alert.

3. Spend some time at No Nonsense Self Defense. Bring a cup of coffee—you’ll be there a while.

Joe: Unlike a lot of authors who blog about writing and publishing, The Heart of the Matter is about politics and language, two of your passions. Is America changing? For the better, or for the worse?

Barry: I think the country is changing for the worse, though I comfort myself in the knowledge that every generation, and indeed the founders themselves, have come to a similar conclusion. Still, the Obama administration has now embraced and thereby rendered bipartisan policies that were rightly recognized as lawless and radical when Bush was doing them: torture including human experimentation; warrantless surveillance; imprisonment forever without charge, trial, or conviction. Indeed, now that Obama has claimed the right to order American citizens killed extra-judicially, he’s even gone beyond Bush, as he has in a number of other areas.

I think traditional civic notions about what democracy means and requires in America have finally been ground down by the permanent state of emergency Garry Wills describes in his excellent book, Bomb Power: The Modern Presidency and the National Security State—what journalist Mark Danner calls the State of Exception. The Cheneys have been effective (and the Democrats typically feckless in response) in persuading a significant part of the country that Torture Has Kept Us Safe (the opposite is true) so when the next attack comes (and it will come, because our current policies create more terrorists than they eliminate), the political foundation for a tighter embrace of torture, war, and other lawlessness will already be in place.

Which is of course what Inside Out is all about—plus the sex, of course.

Barry will be stopping by this blog over the next few days, checking the comments and answering questions (though he's on a whirlwind tour right now so it might take him a bit of time to respond.)

I'll also be chatting with Barry about some of these topics, live, and everyone is welcome to join in. Once we pin down a date and time, I'll post it.
JA Konrath at 8:10 AM
Share