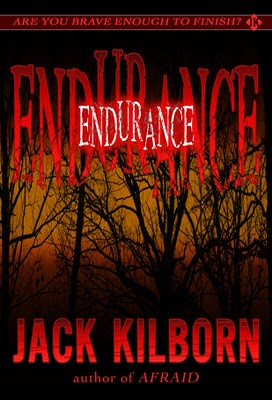 For all of my adult life, I wanted to be a writer. That meant finding a publisher.

So I wrote ten novels--over a million words--and those novels garnered more than 500 rejections from top editors in NY. Eventually, after twelve years of struggle, I landed my first publishing contract.

Since that point, I've been determined to succeed, and have worked pretty hard to sell my books.

Then, last year, some fans asked me to put my early, rejected books on Kindle so they could read them on their cool new device. I figured it couldn't hurt to try.

Fourteen months later, I've sold over 52,000 ebooks, and will earn over $100,000 this year on Kindle sales alone. On books that NY Publishing rejected.

So now I've taken the next, logical step. ENDURANCE (now available on Kindle for $2.99) is being released exclusively as a self-published ebook.

In 2007 I wrote a horror novel called AFRAID under the pen name Jack Kilborn, and that landed me a two-book deal. My publishers wanted a book similar in tone to AFRAID, so I pitched them the idea for a book called TRAPPED and wrote the first few thousand words. They placed an excerpt for TRAPPED in the back of copies of AFRAID, hoping to release the book in the winter of 2009.

Unfortunately (for me), my editors hated TRAPPED when they read the whole thing.

Personally, I liked it. The novel was more intense than AFRAID, and probably a little meaner and gorier (maybe more than just a little), but I believed it kept to the same theme and tone of the first Kilborn book. Namely, regular people in a dark, confined setting, confronted with an overpowering, horrible threat.

Since I wanted to get paid, I rewrote TRAPPED according to the editorial notes I’d been given. I don’t believe it made the book better, but it did make it different. I toned down a bit of violence and sex, added a bit more violence in other areas, changed a few characters, cut a sub plot, and wrote a new ending.

My editors hated the new version as well. So I put TRAPPED away, figuring it would sell eventually, and instead wrote ENDURANCE, the third Jack Kilborn book in my two-book contract.

My editors liked ENDURANCE, but wanted me to make some significant cuts. Having been down that road before, I told them no, and I pulled ENDURANCE from publication.

So now I had two intense horror novels, ready to publish. All I had to figure out is what to do with them.

During the 18 months I’d been working on TRAPPED and ENDURANCE, I’d turned some of my older books (written under my real name, J.A. Konrath) into ebooks. To my surprise, they sold like crazy. Rather than pursue traditional print publication, I decided to do it alone and release TRAPPED and ENDURANCE myself. (TRAPPED actually did have an offer from a major publisher, which I turned down. It will be available on Kindle this week.)

I like ENDURANCE. So much, that I didn’t want to see it diminished by what I felt were unnecessary edits. Though it isn’t as horrific as TRAPPED (I don’t know if I’ll ever write anything as horrific as TRAPPED ever again) there were certain creepy elements to this book that weirded me out. In fact, the whole reason I wrote this book was because of an idea I had while on vacation.

We were renting a cabin in the woods in northern Wisconsin, and I was sitting on the bed when a disturbing thought hit me. What if the cabin’s owners were watching us, right now?

In fact, if you were a psychotic voyeur, it would be pretty easy to rig your house with hidden passages and peep holes, and then rent it out to unsuspecting guests.

I immediately became paranoid, and looked at the closet, the bathroom, the stairs, wondering if I was being spied on.

Then I heard something creak under the bed.

Could someone actually be under there?

No one actually was. But I kept thinking about awful it would be to stay in someone else’s house and suddenly realize someone was under your bed.

Of course, what could be even worse than that?

Someone under your bed, and you don’t have legs so you can’t run away...

I have a feeling NY Publishing will be watching this to see how the ebook does. While huge sales would be nice, I'm not really concerned. I sold over 50,000 copies of AFRAID, and earned around $30,000. I can earn the same amount on ENDURANCE selling only 15,000 copies. It may take a year or two, but I'm pretty sure I'll hit that goal. In fact, over the course of a decade, I'm pretty sure I'll sell a lot more than that.

And the coolest part it, I've done it on my own.

I've spent eight years working with publishers to make my books profitable. I've signed at over 1200 bookstores. I've sent out over 100,000 newsletters. I've mailed 7000 letters to libraries. I've toured 39 states. I've been to over a hundred conferences, conventions, and book fairs. I've blogged and MySpaced and Twittered and Facebooked before anyone in NY Publishing even knew what those things were.

As a result, I've sold a fair amount of books, made a fair amount of money, but never got that big push that would have helped me reach a wider audience. Without coop placement, and discounting, and wide distribution, my books have sold as well as they could have.

But the paradigm is changing. Now writers don't need coop and discounting and distribution. Now I don't need to tour for 68 days straight, or spend all of my free time friending people on social networks. Now I don't have to worry about what the sales reps or big box buyers think. Or advertising, or returns, or bi-annual royalties.

I can reach readers directly. No more gatekeepers. No more middlemen. No more decision by committee. No more people telling me what I can and can't do. No more boundaries. No more restrictions.

For writers, this is liberation. We can make more money selling far fewer books. And we don't have anyone holding us back.

This is good, and I'm going to be interested in seeing how many other authors do the same thing I'm doing.

My guess? Within the next few years: almost all of them.
JA Konrath at 9:18 AM
Share