As of this writing, SERIAL by Blake Crouch & Jack Kilborn has been downloaded over 70,000 times. The majority of these have been on the Amazon Kindle.

Of course, SERIAL is free, which helps. But it's still gratifying to know that our little short story has been read (and in some cases, hated) by so many people.

Naturally, I've been thinking about how I could follow this up.

Jack Kilborn and I got together and did a prequel to SERIAL. Not only does it feature one of SERIAL's bad guys, it also features Taylor, one of the Red Ops from Kilborn's horror novel AFRAID.

I wracked my brain trying to figure out a good protagonist to throw into this nest of vipers, and came up with the obvious.

The novella is called TRUCK STOP. 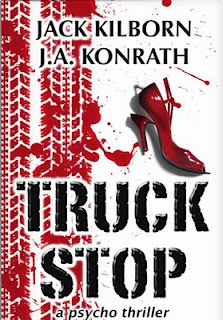 Before the events of Jack Kilborn's epic horror novel AFRAID...

Before the events of Jack Kilborn's and Blake Crouch's #1 Amazon Kindle bestseller SERIAL...

Three hunters of humans meet for the ultimate showdown at the TRUCK STOP.

Taylor is a recreational killer, with dozens of gristly murders under his belt. He pulls into a busy Wisconsin truck stop at midnight, trolling for the next to die.

Chicago Homicide cop Jacqueline "Jack" Daniels is a long way from home, driving to meet her boyfriend for a well-earned vacation. She pulls into the truck stop for a quick cup of coffee and stumbles into her worst nightmare.

Jack's no stranger to dealing with psychos, but she's got her hands full trying to stop Taylor. Especially since he's getting help from someone just as deadly; a portly serial maniac named Donaldson...

TRUCK STOP is a 15,000 word thriller novella that ties together Konrath's and Kilborn's works, with terrifying results.

A prequel to SERIAL, which has been downloaded more than 70,000 times, TRUCK STOP is an eighteen-wheeled ride straight into hell. Not for the faint of heart. Let the reader beware.

This ebook also includes an exclusive interview: JA Konrath talks with Jack Kilborn, plus excerpts from their latest books, CHERRY BOMB and AFRAID.

I'm really curious how this will sell, because Kilborn has been doing better than Konrath on Kindle. I'm also interested to see if this does anything for my backlist of Kindle books.

If you don't have a Kindle, and want to download it as a pdf (or many other formats), I also uploaded it to Smashwords.com.

I'll keep everyone posted. In the meantime, feel free to spread the word...
JA Konrath at 3:34 PM
Share