It’s been over a year since Joe invited authors to use his characters in a collaborative story with their own protagonist. The offer came at a time when I was searching for a writer to collaborate with and this seemed like a perfect fit. His Jack Daniels character is a no-nonsense detective with a sharp wit and a penchant for fashionable clothes. It seemed there was plenty of meat on that bone to chew on. Also, Jack has issues with bloated government agencies and it made the relationship with my FBI agent Nick Bracco character even that more appealing. Who wants a puppy-dog cop following agency instructions? 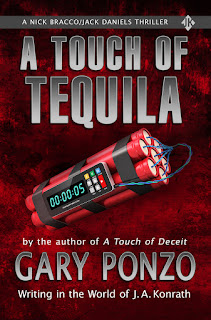 That’s when the idea of a rogue terrorist came to mind. What if FBI agent Nick Bracco’s team, including his mafia-connected cousin Tommy, came to Chicago to track down a terrorist cell about to set off a bomb in downtown Chicago? And what if Nick invited Jack to join the task force to help find a teenage terrorist who was considered the main threat? This sounded like an intriguing concept.  Especially when Jack doesn’t believe the kid wants to carry out the attack. Jack believes the kid was being manipulated into performing his tasks. It’s something she can’t prove so she has to go out there and find this terrorist on her own. Behind Nick’s back. This is a risky proposition since the threat of a detonation is almost guaranteed by agency intelligence.  This was the juicy part of the collaboration for me.

Fast forward a year.  The book is finished. I contact Joe only to discover his plate is full, Kindle Worlds being one of many projects he’s juggling. So my choice was to add this project to the Kindle Worlds platform, or release it as my own book writing in the world of JA Konrath. When discussing this with Joe he showed support for either direction, so I decided to release it as a standalone thriller. That’s when this became a Nick Bracco/Jack Daniels Thriller titled A Touch of Tequila, currently on sale on Amazon.

Since all my Nick Bracco books start with A Touch of . . . it was easy to keep that theme going along with using Tequila in the title which is the name of a character from one of Joe’s earlier books, A Shot of Tequila.  I am the author of the project, but make no mistake about it, people will feel Joe’s presence on this book and hold him accountable should the writing be subpar. That’s where he showed a leap of faith, even writing the foreword for me.

Although I wasn’t able to collaborate with him, I felt a responsibility to make sure Joe’s characters were properly portrayed and behaved within the realm of their personalities. I read and reread many of the Jack Daniels thrillers for research and feel confident my work will resonate with his readers. At the same time, my own readers will definitely welcome the return of Nick, Matt and Tommy Bracco.

If you’re a fan of either of ours, or just a thriller fan--take a look.  It took a year to accomplish, but I had fun playing in Joe’s sandbox and I think the wait was worth it.