Joe sez: With almost two hundred guest posts promised, I'm going to be blogging more frequently. I don't have a choice, because if I leave each post up for two or three days, it'll take 3 years to fit everyone in.

As a compromise, I'm going to link to the last seven guest posts at the start of each new guest post, so everyone's visibility is maximized.

You can read Dakota Madison talking about finding success as a romance writer here: http://jakonrath.blogspot.com/2013/06/guest-post-by-dakota-madison.html

Carlos: First, a huge thanks to Joe. I know you hear it all the time, but I’ll say it again. You give indie authors a glimpse not only into the struggle and pain of writing, but also what can be. You da man.

About me: I've read Joe’s blog since the fall of 2011. I even wrote him a post to say thanks. At the time I was trying to figure out how to self-publish my first novel, Back to War (currently FREE until 6/24/13). I have no idea how many hours I spent scouring posts and comments, picking up nugget after nugget. I was a free info whore and my wife hated it when I stayed up late reading in the dark with my iPad.

If there's one theme I've taken from Joe it's keep experimenting. With that thought in mind, I self-published my first novel. It was more of a passion project at the time as I wanted to give back to the Marine Corps for changing my life. I still owned a small business and never really thought that I would 'qualify' to be a professional writer. Dumb ass. To my surprise the book started selling. I stuck with Amazon mostly for simplicity and their awesome customer service. For me it worked. 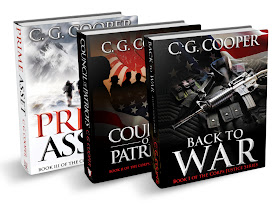 So as I struggled with my property management business, I watched my book sell thirty copies one month, then ten the next, then twenty seven the next…you get the picture. As a big believer in residual income, I was intrigued. I wasn't doing much other than running the occasional Select promo and answering the rare email.

It wasn't until after I’d gotten out from under my company that I thought seriously about writing full time. One book that told me I could be an author was You Are a Writer (So Start Acting Like One) by Jeff Goins. At that time last summer, I was really trying to figure out what I wanted to be when I grew up. That book hit me right between the eyes. Finished it in less than a day and WHAM…I was an author.

I buckled down and wrote book two of the Corps Justice series, Council of Patriots, in just over two months. Published it on Amazon and all of a sudden sales of the first book doubled. Hmmm…

I released the third book, Prime Asset, in three episodes (once again experimenting) and experienced another large boost to my other titles. That's when I realized something amazing. As a big believer of KDP Select freebie promotions (it's the only way I built my small yet loyal readership and actually got visibility) I always used my freebie days to max effect. Results varied when I only had one title. What I realized was that I could do a five-day promo each and every month because I had three books in the series. I started calling it The Rule of Three when other authors asked what I was doing. Throw in a couple short stories and I was seriously boosting the number of potential readers I could get in front of.

I've used The Rule of Three since February of this year. My sales keep growing. I'm finding new readers. Readers are engaged and telling me what they do and do not like. I'm growing as an author.

I also found out something else that Joe mentions. When readers like a book (yes, even a freebie) they'll go buy your other books. That fact is affirmed for me every month as each of my Corps Justice titles sell almost exactly the same number of copies as their brothers. Simply put, it works.

Important things that I've used and recommend for The Rule of Three to work:

1. Use all 5 freebie days at once. It’ll give you a better chance at hitting the Top 100 Free list. Unless you're a big dog like Joe, the days of using one or two days and seeing a huge boost are gone.

2. Have three or more titles even if they're short novels or short stories. Series work for a reason. If you can connect with a reader they will want more.

3. Do what Joe sez: Write a great book, design a hot cover and keep writing.

I’ll apply The Rule of Three concept to my new series The Chronicles of Benjamin Dragon. I released book 1, Benjamin Dragon – Awakening, at the end of May. Now my job is to hurry up and write the next two. In my mind I won't have a chance until then.

So what's the moral of the story? First, listen to Joe. He knows what he's talking about. He's been there.

Second, write a lot of good books. Be prolific. Series sell and they bring new readers back for more.

Third, max out freebie promotion using The Rule of Three.

Thanks again for all the wisdom, Joe. Now back to writing…

I'm glad Carlos is building an audience, and I love his covers. They look like one of the Big 5 put them out. Also, thanks for serving our country in the Marines.

My experience with freebie promos varies. Sometimes I can hit the Top 100 the first day with no promotion at all. Other times I use ebookbooster.com and bookbub.com to get my books up there. I haven't seen any verifiable connection between how many ebooks are given away, how quickly they're given away, and how the title bounces back to the paid list.

Sometimes I give away a lot of ebooks in a few days (50k or more) and I have a nice bounce back. Sometimes I wind up exactly where I was before the promo. But these freebies are getting read, because people are reviewing them. So hooking a reader with a freebie is possible, and can boost backlist sales.

Remember that selling books isn't a goal. It's a hope. Goals are things within your control, and you can't force people to buy or read you.

I've said many times that promotion isn't about selling books to people who don't want them, it's about making people aware of books they're actively seeking.

Also, it bears repeating that I'm just one guy with unique, subjective experience. No one knows everything, me included. What works for me may not work for you at all. All writers need to amass as much information as possible--even if it is contrary to what I say--and figure out what works for them.

A final note: if someone on this blog has a freebie, even if it isn't your preferred genre, download it to help them out. As writers that's the least we can do to help one another. I also encourage readers of this blog to buy ebooks that they're interested in, by both my guest bloggers and by me.

Currently my Codename: Chandler trilogy, co-written with Ann Voss Peterson, is available for $1.99 a title. And if you pre-ordered THREE (which will be released on June 25) you will get it for the $1.99 price.

That's over 350,000 words of over-the-top action, sex, and humor (the series features appearances by Jack Daniels and Harry McGlade) for less than six bucks.

So check out C.G. Cooper, and if you have a little money left over, check out Chandler. (And don't forget to try Marcus Sakey for thrillers and Dakota Madison for romance.)
JA Konrath at 10:19 AM
Share