I get a lot of email, and though I try to read it all, I can't reply to everyone.

Here's one I replied to, reprinted with the author's permission.

It think it's important for reasons I'll disclose afterward.

"Dear Joe Konrath...this may never reach you. You must have millions of fans. Nonetheless, I need to write and express my gratitude to you.

My last three novels were pretty good sellers. Scribners, Ballantine, you know the drill. A few years ago, sales dropped drastically, no more royalties, the recession hit and I started living on my meager savings. Other than that all I own are 3 acres of land here, which in this market no one wants to buy. I don't even own a house.

I studied Creative Writing at university, but for years I was a fashion model in NYC, lived it up and never saved a dime. Then I went back to writing, prepared to scale down and live modestly. But as you know, things got even worse with the economy. It took me four years to write the most recent novel for which a NY publisher offered me less than HALF my previous advance. A depressing figure, to be paid out in fourths through 2013! By then I could be dead, and it won't even pay my bills. I was so desperate I accepted. Now I have to wait another year for the book to be published.

Agents and editors were admitting we're in a 'dying industry.' With dwindling publishers, rock-bottom advances, I didn't see any reason to write anymore, which is what I LIVE for.

Unemployment is staggering here, I couldn't find a job. I sold my good clothes and jewelry, made out a will leaving the land to my daughter. I felt I'd rather die than scrape and starve. (I'm a good swimmer, I'm half Hawaiian, I know how to swim to exhaustion, then unconsciousness.) If I couldn't make a living at what I love to do - publishers and bookstores folding left and right - I felt I'd rather pack it in. I was dead serious, I've never been afraid to die. Its a Hawaiian thing - we always have one foot in the other world.

At first friends thought I was kidding, but then they saw me making plans, they watched me begin to withdraw. Then one day a friend came to my house and said two words. "JOE KONRATH." That's what she said. "This man is going to save your life."

I had never heard of you. She forced me then and there to sit down and start reading your blogs.

I read for two days straight.

You were my epiphany. You were telling me there was life beyond print publishing. In fact a WHOLE NEW WORLD in digital. You led me to the revolution. I started reading your books. So far I have loved SHOT OF TEQUILA and TRUCK STOP. They're tough, fast-paced and humorous, and now and then poetic. I'm still reading. 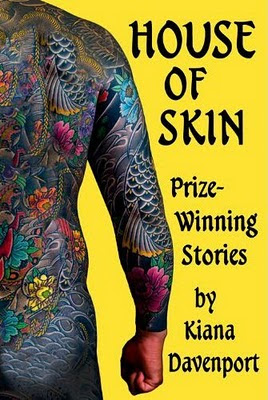 within one month, following your example, I had uploaded onto Kindle my first indie ebook, HOUSE OF SKIN - PRIZE-WINNING STORIES by Kiana Davenport. All the stories I could never get published in NY as a collection. I kept my price low as you suggested, $1.99. Reader reviews have all been 5 stars.

Its selling well. I may never be a bestseller like you, but I am a HAPPY WRITER AGAIN. In fact, I'm ecstatic. My book is mine. My cover is mine. I can write what I feel, not what a publisher demands. I'm now working on my second collection of stories and a new novel. I am digital for life!

Joe, I hope you can go to Kindle and check out HOUSE OF SKIN...I owe it all to you. I kid you not, you saved my life. I am your fan, and have never said that to anyone, not even Norman Mailer. I read everything you write, I take your advice. I thought your recent interview with Barry Eisler was brilliant, shocking and prophetic as hell. I have recommended it to everyone, everywhere, Facebook, Twitter, etc. I'm just building a website and will highly recommend you there as well.

Again, I want to say a million Mahalos! Thanks! For giving me back my deep joy in writing, and my life. I so glad I didn't take that swim. With my alohas from Hawai'i..."

Joe sez: Well, first of all, I'm not deserving of her gratitude. I'm just a writer sharing what I've learned, which is something we all should be doing. I don't have millions of fans, and though she said kind things about my writing, having bought and read a few selections in HOUSE OF SKIN she's much better than I am.

And of course I didn't actually save her life. Kiana did that all by herself. It's a nice thing for her to say, but it was her own inner strength that kept her going, not the stuff I blog about.

As you might expect, I was humbled, touched, and ultimately concerned by this letter. Artists by nature are temperamental, and depression is common in this business.

When Hyperion dropped my Jack Daniels series, I was pretty much a mess. I'd worked like a dog to make sure those books sold. And they were selling. Still are. But I was counting on that next advance to feed my family, and when it didn't come I felt devastated. Worthless. Helpless. It made no sense (still doesn't) and there wasn't a damn thing I could do about it.

There are few worse feelings than trying your best and it not being enough.

I wound up getting another contract a few months later, for much less money. And I kept a brave face in public, downplaying how badly I felt.

I know for a fact I wasn't the only one who had to go through something like that.

Over the years, I've lost count of the conversations I've had with writers who had similar experiences to Kiana and me. Tales of rejection. Of bad luck and stupid publisher decisions. Of getting the shit end of the stick, over and over and over.

It got me thinking. For every writer popping open the champagne because they just got a new deal, there are dozens who have gotten screwed. And no doubt some of them thought about swimming out to sea. While my depression never got that severe, I certainly wouldn't want to relive those dark, depressing, frightening months without a publishing contract.

For the first time ever, writers have a choice.

Choices are empowering. Having the ability to control our futures, even with something as simple as self-publishing an ebook, means we aren't helpless anymore.

Kiana's latest advance for her upcoming novel is a shame. And though she says her self-pubbed ebook collection is selling well, her current rank is so-so.

I'm asking you to buy a copy as well.

Help me spread the word.
JA Konrath at 2:21 AM
Share