HP Mallory is one of the authors smoking me in sales. Not only are her Kindle numbers fantastic, but she's going gangbusters on Barnes & Noble. My B&N numbers are so-so--roughly 400 a month. I expect this to change when I switch from Smashwords to PubIt next week. While I love Smashwords, in order to upload to B&N through them I have to use shorter descriptions and fewer product tags. Several of my peers have shown me that this is often the key to selling big numbers, so I look forward to seeing if I have similar results.

Like Karen McQuestion and Amanda Hocking, Mallory is kicking ebook butt without ever having sold a book through traditional publishing, even though she tried.

Now, I don't discount that the Big 6 reject a lot of crap. But their ability to separate wheat from chaff is impressing me less and less. My rejected books have sold over 100,000 copies, and I'm currently selling 600 ebooks a day (In the first ten days of January, I made over $12,000.)

Yes, everyone makes mistakes. And hits are hard to pick. Last I heard, only 1 out of 5 books lucky enough to get past the gatekeepers actually turns a profit (two lose money, two break even.) But every indie success story is a crapload of money that NY missed out on, and we're seeing more and more writers making big dollars on books that were passed on by both publishers and agents.

Publishers have had a hard few years. The recession was tough. Fewer bookstores mean fewer sales. Amazon and the rise of ereaders is eating into their print sales. But I don't think bookstores closing, or customers switching to ebooks, are what publishers need to fear most.

Now, if you talk to any group of newbie authors who have been rejected by the industry, you'll feel their bitterness toward the difficult, often humiliating, and seemingly arbitrary nature of the query-go-round.

And if you talk to any group of professional authors, you'll feel their bitterness toward publishers who have made a lot of mistakes in regard to their books and careers.

Add the fact that publishers take 52.5% royalties on ebooks, leaving the authors only 17.5%, and that even if an author landed a contract today there would still be an 18 month wait for the book to come out, and I have to wonder what publishers are going to do in order to keep authors submitting to them. Hint: DRM and high ebook prices aren't the answer.

As more authors hear about the possibilities self-pubbing offers, and read about success stories like this, what could possibly motivate them to ever sign another publishing deal? Publishers, once an essential part of the equation, are no longer needed to connect authors and readers. And, amazingly, they don't seem to understand this yet. 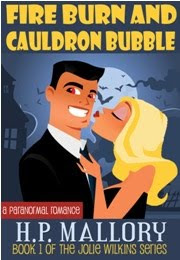 Hello! HP Mallory here! Joe was kind enough to let me borrow his blog for a quick post about a pretty fun contest I’m running. The winner will become a character in my next book, due out in April! You can find more information here.

OK, so now that my shameless promotion is out of the way, LOL, I thought I should introduce myself since I imagine none of you have a clue as to who I am. Well, as you know, my name is HP and I’m a self-published author. I sort of prefer the term indie—it just sounds cooler.

Anyway, my story starts about three years ago when I was living in England and decided to write a book. Although it might sound like my book writing debut was a whim, it was anything but. I’ve always wanted to be a writer, ever since I was young. But, it seems like life (aka parties, drinking and boys) got in the way while I was in my twenties. Fast forward to my early thirties and I was ready to write my novel. I’m a big fan of paranormal romance/urban fantasy so writing in these genres just felt right.

After I finished my first paranormal romance, Fire Burn and Cauldron Bubble, I figured it was time to get an agent. So, I sent out query letters and was pretty encouraged by the responses to the book, as agents requested partials and fulls. Imagine my elation when my dream agent requested the full, stayed up all night reading the book and offered representation the next day! Oh, happy day! Well, happy day turned into two or three months of rejection after rejection and then the fab agent gave up on me and I never heard from her again.

So, thinking I had something in common with Hester Prynne, only my scarlet letter would be a big “L” for loser, I gave up. And I gave up for about two years. Then, my fabulous critique partner, Lori Brighton, told me about a lady named Karen McQuestion who had uploaded her books to the Kindle self-publishing platform and was outselling traditionally published authors. Well, I figured I had nothing to lose and decided to put myself out there and see what happened.

On July 7, 2010, I uploaded Fire Burn and Cauldron Bubble followed by my other book, To Kill A Warlock. And…nothing really happened. I sold a few books here and there—not exactly earth shattering. Figuring I needed more of an audience, I started thinking about how to spread the word. I created a robust website, joined Facebook and started blogging. Then I got fairly involved in the Kindle forums and started contacting book bloggers to see if they might be interested in reviewing my books. I was amazed to find they were interested! Little by little my reviews grew and my rankings on Amazon improved bit by bit.

Then Barnes and Noble came out with the Nook self-publishing platform, Pubit, and I uploaded both of my books right away. The Barnes and Noble Gods must have liked me because my books were suddenly ranked first for searches like “fantasy” and “paranormal romance”. I was amazed as more and more sales rolled in. At this point, I was selling about 1,000 books a month across both platforms.

In December I came out with a third book, the second in the Fire Burn series, Toil and Trouble. And, wow, December was an incredible month for me. I sold nearly 23,000 books and to date, I’ve sold roughly 37,000.

So, the long and short of it is that self-publishing saved my books from a life of quiet desperation in my PC. Now, I have a thriving Facebook community, I’m on the Kindle bestseller list, I landed a new agent who hopefully will be better than the last one and some marketing company in Brussels just wrote an article about me! Random!

I’m an indie author and I couldn’t be happier!!!

Thank you to Joe for allowing me to tell my story and plug my contest!!

Joe sez: Success like Mallory's isn't the norm. Luck plays a part. Luck always plays a part. But selling 20,000 ebooks in a single month is more than just luck. She's done a lot right in order to maximize that luck.

Cute, professional-looking covers, good writing, low prices, and her ability to utilize social networks no doubt helped her sell so many. She's spent the last 17 days in the Kindle Top 100, and all three of her books are in the Top 50 on Nook. (Incidentally, two other indie authors, Amanda Hocking and Selena Kitt, also have several spots each in the Nook Top 50.)

Now, hindsight is always 20/20, and I'm sure the comments section will abound with Monday Morning Quarterbacks eager to explain and dismiss Mallory's success. These may include:

"Paranormal Romance is a hot genre."

Joe replies: Then you write one and crack the Top 100.

"She's an anomaly compared to the 300,000 other indie authors who sell poorly."

Joe replies: A New York Times bestseller is an anomaly too. But unlike the NYT, Mallory did this on her own, without a big advertising push or coop.

"If she had a traditional publishing deal, she'd sell ten times this amount."

Joe replies: If she had a traditional publishing deal, her books wouldn't be out until June of 2012. Will there even be bookstores still around then? And how much money will she have lost during those 18 months her books aren't available (best guess, minimum $300,000.)

"The majority of indie authors will never reach this level of success."

Why has it become "unless you sell 10,000 ebooks a month you're better off going the traditional route"?

The point of this blog is to show authors what is possible, not what is likely.

It's still notoriously difficult to find an agent and sell a book. And even if you manage that, the book takes a long time to be released (and it will be at a high price with DRM, which readers hate) and there is no guarantee it will be successful. To make the odds even worse, there is a high likelihood that it will be difficult to ever get the rights back, and the writer will be stuck in a bad royalty situation forever.

If there's something to be learned by me, HP Mallory, Selena Kitt, Karen McQuestion, Amanda Hocking, LJ Sellers, Michael R. Sullivan, and the many other indies currently doing well, it's that good books can find a wide audience without New York.

But before that can happen, those books have to be self-published.

How many trunk novels do you have? How many books of yours are currently on submission? How many of your backlist titles are out of print?

There is NO GOOD REASON not to get those up on Kindle, and Nook, and Smashwords.

Every day you wait is a potential sale lost.
JA Konrath at 10:08 AM
Share