Ebooks Sales Slowing? Yes and No

Joe sez: This blog originally appeared in 2010. It's extremely prescient about the future of ebooks, but that isn't the reason I'm reposting it.

I'm reposting because I got my very first DMCA Takedown notice.

Blogger has been notified, according to the terms of the Digital Millennium Copyright Act (DMCA), that certain content in your blog is alleged to infringe upon the copyrights of others. As a result, we have reset the post(s) to "draft" status. (If we did not do so, we would be subject to a claim of copyright infringement, regardless of its merits. The URL(s) of the allegedly infringing post(s) may be found at the end of this message.) This means your post - and any images, links or other content - is not gone. You may edit the post to remove the offending content and republish, at which point the post in question will be visible to your readers again.

Apparently my infringement, according to the website Lumen, was including an Amazon link to author Lexi Revellian.

Lexi was originally mentioned as one of the laundry list of authors below. I've since removed her name and Amazon link from this post, but this has brought up some interesting points.

1. Linking to an Amazon page is in no way a copyright infringement.

2. I'm pretty sure all authors want as many websites as possible to link to their books.

3. I don't think I know who Lexi is, but this was seven years ago and I may have forgotten. I have no idea why, seven years after the fact, she or someone working on her behalf, would complain to Blogger about a very old fair use post of mine that was supportive of her work.

I know that some authors hire companies to scour the Internet for examples of piracy. These companies dish out DMCA notices like drunks throw out beads at Mardi Gras.

As mentioned by Blogger in the email above, they remove posts regardless of merit. Which means anyone can accuse anyone of copyright infringement, and Blogger (along with many other Internet companies) err to the side of the accuser.

4. I have no idea if Lexi is using any services to protect her copyrights, because I have no idea why I got this notice. But I will offer some blanket advice to all authors who think about using one of these services:

Piracy doesn't harm authors. I have written ample posts about this topic.

Hiring companies to police the Internet, looking for evidence of copyright infringement and sending out DCMA notices, does hurt authors. Lexi had an Amazon link to her website, that even seven years later still gets traffic. Now her link is gone. That can't be helpful for an author. And I can guess I'm not the only blogger who is getting notices like this. How many writers, thinking they're combating piracy, are actually limiting their own reach?

Probably a lot. So I'll say it again:

It's a waste of time, and money, and also potentially career-damaging, to fight piracy. I say this as someone who has been pirated a lot for over a decade. People pirate me. And I don't care. And there is absolutely no verifiable evidence that ebook piracy harms authors.

If you're concerned about piracy, make sure your ebooks and audio are easily available and affordable.

But, as I said, you shouldn't be concerned. People are going to share files. It's part of the human condition. Anti-piracy laws are about as successful as anti-drug laws.

The enemy is obscurity, not people reading your work for free.

Am I the only one who noticed this from Publishers Weekly?

"Facing some harder comparisons, e-book sales posted their slowest growth rates in 2010 in October. Still, sales jumped 112.4%, to $40.7 million, from the 14 publishers who reported results to the AAP’s monthly sales program."

The article is HERE.

Now, a few things struck me when I read this.

First, probably because I'm a writer and have an overactive imagination, I pictured editors in NY clinking champagne glasses with the toast, "The ebook bubble is bursting, thank Gutenberg, and soon we'll be able to get back to what we do best; selling paper."

Except it's a myopic, self-absorbed, and flat-out misleading fact.

This shows that ebook growth has slowed for 14 REPORTING PUBLISHERS.

That doesn't mean ebook growth is slowing for Amazon, B&N, Smashwords, or the tens of thousands of indie authors self-publishing.

My numbers have been steadily climbing for 21 months, and in the last six weeks I made $26,000.

Yesterday, I mentioned Amanda Hocking, who is selling 1200 ebooks a day.

In the past, this blog has mentioned Zoe Winters, Karen McQuestion, and Selena Kitt. Selena Kitt made $120,000 this year on her Kindle ebooks.

But these are all outliers, right?

If you check over on Kindleboards, Michael Sullivan sold 7500 ebooks in November. The thread also lists 14 other authors who sold more than 1000 ebooks last month.

Here are the names of these authors. Keep an eye on them. I only expect their sales to go up.

PW or AAP didn't poll any of these writers and ask if their growth was slowing down. They certainly didn't ask me.

And these authors I listed aren't the only ones with growing sales--I'm just too lazy to gather more info. If you're an indie author who sold more than 1000 ebooks in November, post in the comments section and I'll add you to the list.

But then, indie sales don't amount to much, right? After all, 1000 ebooks a month isn't a lot. Not compared to what Big NY Publishing does.

Whiskey Sour, by all counts my highest selling and most successful books, has sold 60,000 copies since 2004. That means it has averaged 770 copies a month since its debut.

1000 copies a month seems pretty damn good to me.

But then, these are indie authors. It's not like there are any professional authors jumping on this Kindle bandwagon. Except for maybe:

There are many more, but I'm tired off adding all the links.

However, I do want to post this final one, because I think it's pretty damn cool. 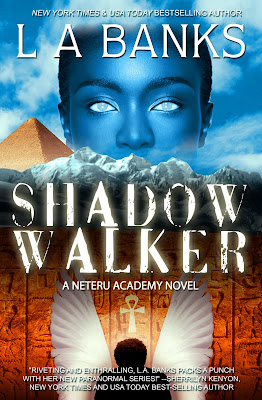 This is the latest book by bestselling author LA Banks.

I met Leslie at a writing convention in New Orleans, and we traded stories about how we'd gotten screwed in our careers, which lead to me talking about ebooks.

If you look at the cover (designed by my cover artist, Carl Graves at Extended Imagery), you'd think this is her newest Big NY Print Release.

So... perhaps there is a reason ebook sales are slowing for those 14 publishers mentioned in PW.

Perhaps sales are slowing because more readers are buying indie books. Or because more professional writers are going indie. Or because publishers are too self-absorbed to notice anything happening outside of the insular world they've built for themselves.

But what do I know? I'm an outlier.

Of the names I listed in the blog, I'm one degree of separation from at least 80% of them. The rest, I'm probably second degree.

You hear that, NY Publishing? You truly want to slow the growth of ebooks?

I'm willing to be bought off. Pass around a collection envelope, like you do for employee birthdays. For a million bucks, I promise I'll never blog about ebooks, or help another writer, ever again.

Here's my Paypal button. Maybe we can do business.