I've worked with Jeff Strand on the novella SUCKERS, as well as the full length horror epic DRACULAS. But apparently that hasn't hurt his career, because he's still churning out books. When I heard he just released a new one, I knew I had to interview him, because it was doubtful anyone else would.

Joe: So why have you written another Andrew Mayhem thrillomedy after a thirty year hiatus? Have you run out of ideas for stand-alones so you had to slum with the old series?

Jeff: I didn’t even WANT to do another Andrew Mayhem book. My fans FORCED me to write it. Everywhere I turned there was another Annie Wilkes, waving a sledgehammer (or an axe if they prefer the book to the movie) screaming “Mayhem IV! Mayhem IV!”

But, seriously, after promising readers a new Mayhem novel for seven years, I thought it was probably time to actually deliver on that promise. On my website, I swore that LOST HOMICIDAL MANIAC (ANSWERS TO “SHIRLEY”) would be published before the end of 2011, and I got it out a couple of days before that. I’m not planning to wait another seven years to write Book #5, unless sales of Book #4 are total crap, in which case I’ll wait even longer than seven years.

Joe: I hate that term "thrillomedy". It's really stupid. Why do you keep calling your books thrillodemies?

Jeff: I have never in my life called any of my books thrillomedies. You’re thinking of the movie ARACHNOPHOBIA. I remember my enthusiasm for ARACHNOPHOBIA fading a bit when I saw the commercial promoting it as a thrillomedy. If I ever feel the need to make up a word to create my own genre, you have my permission to stab me. Not hard, but enough to break the skin.

Joe: Maybe you could call them comillers, but that sounds kind of like a reptile. "The wily comiller lives in the desert climate of New Mexico, where it eats small children and spends lazy summer nights watching Fox News, searching in vain for liberal coverage."

Heh. That's kind of funny. You should make that the topic of your next thrillomedy.

Hey, did you know I've hung out with Harley Jane Kozak, who was in ARACHNOPHOBIA? She writes a fun mystery series about a greeting card designer named Woollie Shelley, and we were both nominated with the Anthony and the Barry award for best first novel. She beat me both times.

Thanks for picking the scab off of that old wound, Mr. Considerate. Don't you have better things to do than hurt me? Like kill innocent people in your thrillomedy books?

Joe: I think it's funny when small children get eaten by anything. But I'm a hypocritical dick.

So I hear one of my characters has an extended cameo in SHIRLEY. Did you enjoy writing for Harry McGlade? And have you gotten the lawsuit papers yet?

Jeff: Writing Harry McGlade’s top-secret cameo scene that readers aren’t supposed to know about in advance was a lot of fun, until the SUCKERS flashbacks began, and I sat at my desk twitching and weeping. I was going to put Jack Daniels in there and kill her off, just to see if you would go “Well, phooey, there’s nothing I can do; it’s been officially established in the canon now.” I’m honestly not sure why the cameo went to Harry McGlade instead of somebody awesome like Repairman Jack.

Joe: Repairman Jack has made over ten cameos in my books.

Joe: He's in my unpublished fan fic. I have this great scene where he's having sex with Uhura from Star Trek, in the back seat of the Delorean from Back to the Future. Then Boba Fett and Sam Beckett (Quantum Leap) kill Harry Potter with Gollum's ring. Then, more sex, this time on a trapeze.

Now I'm thinking of a color. Can you guess it? 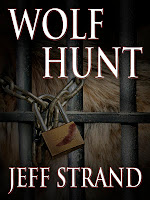 Jeff: No. Everybody who reads your blog knows that you only think in black and white.

Joe: That's not true. But good on you for self-pubbing SHIRLEY, because anyone who goes the legacy route is no doubt a certified galloping dunderhead, and self-pub is clearly the only smart route to take.

BTW, I really liked SHIRLEY, and for less than three bucks it's a steal. I think everyone should buy it right now. Do you agree?

Jeff: A brand new novel for $2.99? There could be no better deal, except maybe $0.99, but everybody knows that 99-cent novels are self-published garbage.

(It should go without saying this late in the interview, but that was a joke.)

Joe: Now I'm thinking of another color. I'll give you a hint. It's bluish.

Jeff: Is it a turnip?

As the undisputed king of the thrillomedy comiller genre, do you ever see yourself branching out and doing other, better things? Like sci-mance (science fiction and romance)? Or urbtate (urban fantasy merged with books about the prostate)?

Jeff: Though I call myself a “horror/comedy author,” my books have always slid around on the humor scale, from the totally over-the-top goofball tone of BENJAMIN’S PARASITE to something dark and serious like PRESSURE. My 2011 novel FANGBOY was a fairy tale, WOLF HUNT was as much of a crime/action novel as a horror/comedy, and KUTTER was a conscious attempt to tell a story that should have been a ridiculous comedy (a serial killer adopts a Boston Terrier and becomes a better person) and play it totally straight. I’m working on a bunch of different projects, some of which are departures and some of which are exactly what you’d expect.

Joe: SHIRLEY is both funny and flat-out disturbing in parts. There was one point where I actually put my Kindle down because it was getting so intense. So did you watch the Iowa caucus?

Jeff: Pork’s okay. It’s no beef. And it’s not as good as chicken in Buffalo wing form.

Joe: Have you done anything else noteworthy lately?

Jeff: Nah. I meant to, but then I got distracted. But your readers who have no interest in LOST HOMICIDAL MANIAC (ANSWERS TO “SHIRLEY”) may be equally uninterested in FAINT OF HEART, a novella of suspense, and A BAD DAY FOR VOODOO, a splattery Young Adult comedy, both of which will be out in 2012. Along with some other stuff.

Thank you for allowing me to pollute your blog again, Mr. Konrath/Kilborn/Kimball. TIMECASTER was awesome.

Thank you, Mr. Strand. Everyone reading this blog needs to go out and buy Jeff's books, or I'll stop posting my self-pub numbers. Also, I will use my powers of alchemy (taught to me by Repairman Jack) to send the world into a new ice age, one that will will have no Ray Romano in it and will be very cold and unpleasant.